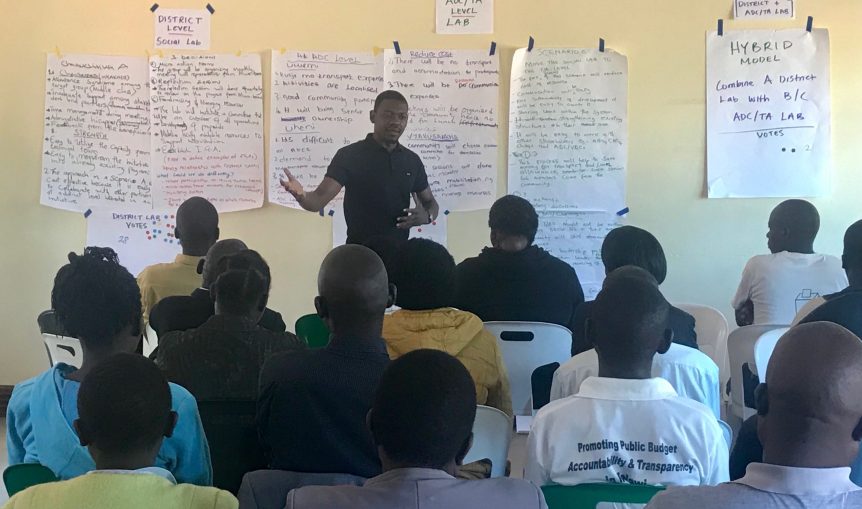 This post was originally published by the Global Partnership for Social Accountability on July 9, 2019.

“We need the local people themselves to prescribe solutions to the problems they’re facing, and they must be able to lead in testing and implementing those solutions.”

Charles Kajoloweka, Founder and Executive Director of Youth and Society (YAS) in Malawi.

The importance of locally led development efforts is widely acknowledged in the sector, but examples of local community members designing and testing their own social accountability interventions is still rare. Through the USAID-funded Local Works initiative, Youth and Society (YAS), Root Change, and Keystone Accountability are currently facilitating 11 such community-led experiments in Malawi through two social labs–in Rumphi in the North and Mulanje in the South. Social labs offer a promising new approach to improve trust, citizen voice, and accountability by bringing together diverse local stakeholders to create, test, and reflect on short-term experiments to address local challenges.

YAS, Root Change, and Keystone Accountability presented this work at the 2018 GPSA Forum in DC.  Now, as the Local Works grant is coming to an end, we followed up with Charles Kajoloweka to hear about what he has learned while facilitating the social lab in Rumphi.

What are the social labs?

CK: Social labs are inclusive platforms that bring together community stakeholders from different backgrounds–civil society, government, community leaders, local government structures such as Area Development Committees and [Village Development Committees] and private citizens–to reflect on the development challenges facing their communities, begin to build solutions together, and test those solutions [through micro-actions].

CK: In Rumphi, we have 5 teams that are testing different ideas. For example, one team is tracking the use of development resources–the district development fund and the constituent development fund–[that have a] background of corruption and the abuse of local resources by local authorities. [The team has] been able to monitor some of the projects that have been implemented in the area. In some cases, they have gone to assess the quality of the work that has been done by local government authority and even followed up on projects that have stalled. We have [also] seen this group going to work with the communities and finding that the communities have not been informed about their rights and the power they have. [Through work with this micro-action team], these communities are now trying to push on the authorities to explain why this is. This is one example of citizen-led demand for accountability that is being tested by this group.

We have another group that is focused on a solution to improve accountability of NGOs through a citizen charter. You have a [micro-action team] that is led by a CBOs and ordinary citizens that say that it is time that we hold the [international] NGOs accountable for the work they do in our communities, ensuring that there is participation of the communities, ensuring that the resources that have been spent in the name of the community are accounted for. This [team] has been able to facilitate the development of a citizen charter, which is a tool to hold the NGOs accountable. There is growing interest not just from the NGOs, but the community leaders, the district council to ensure that this charter is implemented and replicated in other parts of the district.

[Through this work,] the Rumphi district council has [also] revised its approach to what is called the “deck meetings”–stakeholder meetings organized by the district council. Previously, concerns were raised by CSOs on the favoritism and discrimination that was being perpetrated by the district council. This has been addressed by ensuring that there are standard practices that have been put in place. Now there are improvements in inclusive participation of CSOs who were not previously invited to the deck meetings. This is happening because of the efforts to ensure that there is improved relationship between the council and the other development actors, including civil society organizations.

What is your hope for the future of the social labs? How are groups organizing for sustainability?

CK: When we ask members of the social lab, what will this initiative become after facilitators like YAS, Keystone, and Root Change leave? That question has opened the community to new opportunities. For example in Rumphi, it is amazing that the social lab has taken up their own leadership. From individuals who came for the first workshop, just to listen, they decided to stay with the idea, and today they are no longer participants, today they are active players, and they are the owners of the social lab. Today they have opened their own bank account, today they have started putting together their own resources. These are the people that we looked at as very poor people, but out of their own dry pockets they are giving something to say “I can make this small contribution to the development of my community because we need to sustain this initiative.”