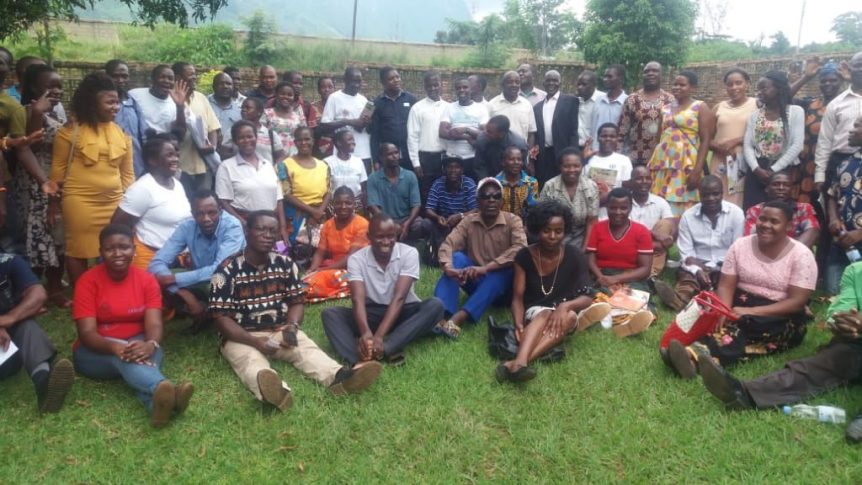 Emas Potolani and Myson Jambo are Root Change’s Social Lab Field Managers and Malawi Ambassadors who served on the frontlines of a USAID-funded Local Works Initiative in Malawi. The purpose of the Social Lab is to test alternative approaches to supporting, sustaining and measuring locally owned and led development.

The Social Labs were formed as a result of a country-wide listening tour, which aimed to understand how Malawians felt about being on the receiving end of aid and to provide a container for local change agents  to come together  to test  solutions to development  challenges in their communities.  Two Labs – one in the north of Malawi in Rumphi district and the other in the south in Mulanje district operated between early 2018 and 2019. At the end of this period, the Labs were given a seed grant that supported a transition to local ownership. In this post, Emas and Myson share an update on the Mulanje lab almost two years after program funding ended.

The Mulanje Social Lab serves as a hub for willing change agents to volunteer their time to test ideas for solving problems that get in the way of district actors functioning more effectively together and collaborating as agents of their own development. The Lab is made up of more than 60 participants, drawn from active citizens, district government, Traditional Authorities (TAs), faith-based leaders, Village Development Committees (VDCs), Area Development Committees (ADCs), community based organizations (CBOs) and non-governmental organization (NGOs).

We worked hand in hand with the participants to facilitate the Social Lab processes, which included holding brainstorming sessions and narrowing down big ideas to “testable” hypotheses and then into experiments called “micro-actions”. These experiments were tested for a period of two months in locations of their choosing. As “critical friends” we offered feedback and insights during bi-monthly Reflection Workshops and, using what they learned together, participants created new micro-actions to test.

Half-way through the implementation of the Mulanje Lab, we discussed with participants their willingness to continue with the lab after the official project ended. They were eager to keep going and decided to test the idea of decentralizing the Social Lab to the community level and chose Kazembe Village in the district for the pilot. They elected members to anchor the transition process, provide overall leadership and to act as coaches. Next, they held consultations to get insights and ideas on how best a Community Social Lab could be implemented, which helped to get buy-in from the Kazembe leaders who mobilized community members and encouraged them to support the launching of the Community Social Lab by contributing money or time to the effort.

The start-up of the Kazembe Community Social Lab involved a design exercise that invited village level actors to identify development challenges and potential solutions. The villagers decided to test solutions to two priority challenges: low participation of the community members in development projects; and the lack of accountability by organizations and politicians who bring development projects to the community without first engaging with the people who live there. Teams were formed to test solutions to these two challenges and to begin engaging local chiefs, village development committees, the district council and NGOs working in the area. This work continued and then the pandemic occurred. During Covid-19, while waiting for conditions to be safe enough to resume its activities, the Kazembe Social Lab has been monitoring the distribution of PPEs and materials donated to the community to make sure that there is transparency and accountability in the process. Being part of the Social Lab continues to challenge us in our efforts to promote locally led development. Nothing is predictable. Each time we met with the participants or interfaced with communities, there was something new to learn. Perhaps the most important lesson that our involvement with the Social Labs in Malawi taught all of us, participants and facilitators alike, is the importance of testing assumptions through micro-experiments before implementing any project and to design approaches to projects  in ways that leave enough room for innovation.

The Future of the Social Lab

The Social Lab in Mulanje district is today being led by the same local actors who were members of the Lab in 2018. The District Lab is providing technical support to the Community Lab and collaborating with it to raise funds. We envision that this partnership will continue and potentially spread across the entire district. We stay in touch with the leadership of both Labs and provide help wherever necessary. Our hope is to share more broadly what the Labs are doing and highlight their efforts both nationally and internationally.  We want others to learn and adapt some of the good practices emanating from the Labs and the communities around them.  We will also keep writing blogs and continue to share with you the latest news about what is going on with the Social Labs in Malawi.