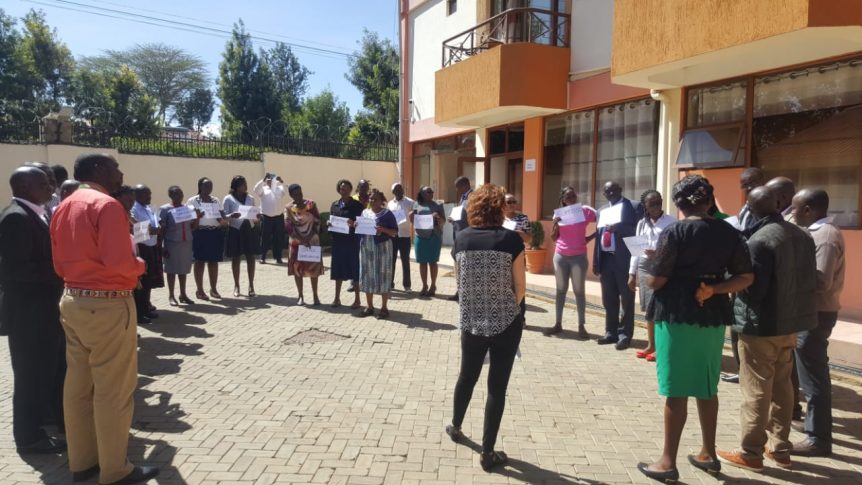 Starting in 2019, three implementing partners of the USAID Cooperative Development Program (CDP), Global Communities, NCBA CLUSA, and WOCCU, joined forces to conduct a Social Systems Network Analysis (SSNA) in Kenya with support from Root Change. The CDP partners were interested in understanding relationships among emerging and established actors in the Kenyan cooperative sector to discover entry points for their own programming to support cooperative networks and build capacity of cooperative support organizations. As Virginia Brown, NCBA CLUSA Program Manager, explains, “Cooperatives are a specific type of business that need a specific ecosystem to thrive.” Since all three organizations have the same goal to improve the system in which cooperatives in Kenya operate, it made sense for them to collaborate and share costs to conduct the SSNA and to use the results to determine the most effective way for the three organizations to complement each other’s activities.

Over the course of 6 months, the CDP partners launched Ushirika Hub, using Root Change’s participatory network mapping platform, Pando. Ushirika is the Kiswahili word for “cooperative,” and Hub was used to convey a sense of convening or coming together. The mapping focused on 6 counties in Kenya where the CDP partners are working; each organization chose two target counties to include in the initiative. While each organization was more well-known in the counties where it operates, Lydia Omamo, NCBA CLUSA Kenya Country Coordinator, says, “We presented ourselves as one program with one goal.” This was true both in the branding of the initiative and in the activities carried out.

In addition to sponsoring the online mapping, the three organizations also co-sponsored two sets of events that brought cooperative stakeholders together. The first set of “launch” events was hosted September-October 2019 in each of the 6 counties to explain Ushirika Hub and conduct an initial mapping of stakeholders’ relationships with one another. The second set of “meaning making” events was hosted January-February 2020 in each of the 6 counties to share back the results of the mapping and open a stakeholder dialogue to learn more about the quality of relationships and barriers to collaboration. These events were important for hearing the ecosystem story from cooperative stakeholders themselves and for understanding the nuances between the different counties. Pamela Kaburu, Global Communities Monitoring and Evaluation Specialist, put it well when she said, “At the end of the day it is their system and their space. It’s their work, their reality.” Through Ushirika Hub, the CDP partners hope to build a greater sense of community ownership for the cooperative sector in each county. Team debrief after the launch event in Meru

Anyone who has planned an event knows how much preparation and support goes into each one, and the CDP partners hosted 11 different events across 6 counties with an estimated total of 500 attendees. Tindi Sitati, Global Communities Collaboration, Learning & Adaptation (CLA) Officer, acknowledges, “This is not a 2 or 3-person exercise.” All team members attended our first couple events so that later we could split the team and host simultaneous events in different counties. “We planned together in advance and then after each [event] we would have a debrief to talk about what went well and what did we need to adjust,” explains Lydia. This helped with team communication and role setting, as well as improving upon the event model as we went along.

Root Change also spent time coaching and co-facilitating with the Kenyan teams so that they felt comfortable hosting the last few events on their own. In September 2019, our team arrived in Kenya a week before the events started to connect with the CDP teams, train them on SSNA, and help prepare for the events. “We really grew as a team in our capacities to facilitate,” Tindi says. Because of the foundation of communication and trust that we had built with the CDP team in the fall, it was easy to arrive only a day or two before the events started in January. We knew that the CDP team was on top of it when it came to preparing for our arrival and the next round of events.

Event planning and facilitation is only half the battle. You also need to get people to show up. Pamela notes that mapping in counties where the CDP partners already had influence and presence was important. “We all brought our strengths and networks within the counties to be able to have good representation of cooperatives,” she notes. In each of the 6 counties, the CDP partners have a longstanding relationship with the county government, especially the County Department of Cooperatives, which played a critical role in reaching out to the cooperatives in that county and inviting them to the Ushirika Hub events. The CDP team then followed up with their own contacts by phone or email to personally ask if they would be attending. While this took some time from the teams, it was an opportunity to reconnect one-on-one with the county government, cooperatives, and service providers. 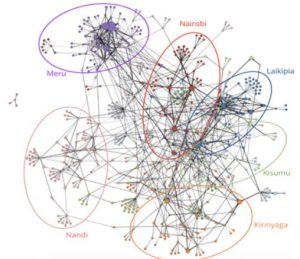 Ushirika Hub Map on Pando, showing each of the 6 counties

One caution on organizing a mapping in this way: The SSNA baseline findings from Ushirika Hub are reflective of the CDP partners’ networks, which while helpful for the scopes of the CDP projects, is not reflective of Kenya’s entire cooperative landscape. For example, in Meru County findings focused on the dairy sector because NCBA CLUSA works with mostly dairy cooperatives. Coffee and tea are also grown in the area, but little was learned about these networks. The CDP partners hope that this initial activity will help to build awareness about the map and organically grow Ushirika Hub in the future, thus broadening the range of actors and sectors in the network.

Hosting stakeholder events as part of the Ushirika Hub mapping has created a space for cooperative stakeholders, including the CDP partners, to collaborate and hold a dialogue in addition to collecting data about the cooperative ecosystem. Fridah Kanana, WOCCU Operations and Learning Officer, shared her excitement about the three CDP partners being able to continue to learn from one another, work together on the findings, and ensure complementarity in their activities. We also heard many times from stakeholders who attended the events what an invaluable experience it was to come together in a room with their peers… a feeling the CDP partners hope to continue online with Ushirika Hub and through their future programming.

We are currently preparing a follow-on to this blog post, which will include more details about the results of this unique and collaborative SSNA of the cooperative ecosystem in Kenya. Stay tuned for more!