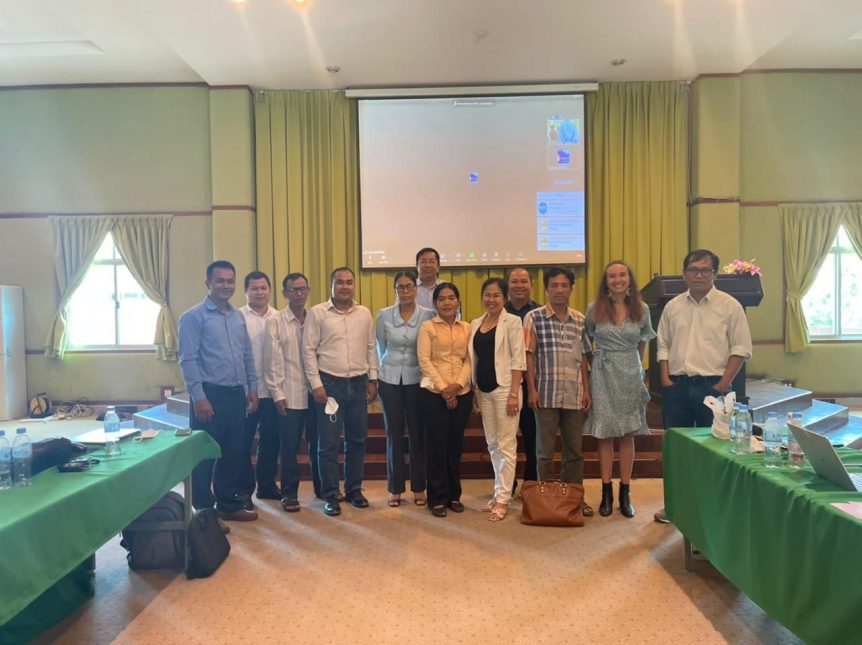 This blog is a follow-on to an earlier post about a Social Lab that was conducted as part of the three-year USAID-funded Local Organizations—Movement Towards Self-Reliance (LO-MTSR) activity implemented by The Cloudburst Group (Cloudburst) and their two major partners, Partners Global and the DevLab@Duke University. LO-MTSR aimed to increase the organizational resiliency of Cambodian civil society organizations (CSOs). One method for doing this was through a Social Lab, led by Root Change and supported by three Cambodian coaches. The Social Lab brought together diverse local stakeholders to improve trust, voice, and accountability by launching and then reflecting on the results of short-term “lean experiments” to test solutions to local challenges. The original blog post, which includes more information about this methodology and each of the teams, can be seen here.

Over the last six months, three teams of local CSOs in Cambodia have been practicing their skills in pitching innovative solutions, forming partnerships with peer colleagues, designing experiments, and adapting ideas based on lessons learned. The three teams formed in March 2022 as part of the Resiliency Cambodia Social Lab have had very different learning journeys since then—a hallmark of the social lab model, which leaves choice and accountability in the hands of its participants. Below we highlight activities, learning, and next steps from each of the teams during their second round of experimentation, between June and August 2022. This was the final round supported by the LO-MTSR activity, which just came to a close. The Cambodia Social Enterprise Network (CSEN), a group of CSOs who came together in March with the idea to create a joint social enterprise for ecotourism, completed a second site visit, this time at Chroy Svay on the Cambodian coast. Following their site visit to Chambok Resort in April for their first lean experiment, this group decided to seek out a second site that operates differently than the first. Chroy Svay is a new ecotourism site in which five communities have come together to manage their natural resources and offer homestays as well as meals and nature activities. From this unique model the CSEN team learned a lot about the homestay model, how to manage committees from each of the five communes, and how weather can affect tourist activities–it rained almost the entire time the team was visiting! The team also applied learning from their first visit to adjust logistics around organizing the team trip (such as cutting down the number of days for the visit). Next steps for this team include seeking out funds for their third site visit, which they hope will be to Samouy Island (in Thailand) so that they can learn from neighboring countries as well. Finally, the team is revisiting their original idea of a joint venture for ecotourism and starting to think that an ecotourism company that could design and support the implementation of more than one site might have greater impact in Cambodia than opening a single site. The Social Youth Festival team, a group of youth-focused organizations, has been experimenting with the idea of designing and implementing an annual youth festival to demonstrate youth talents and achievements, foster networking between youth and NGOs, and build collaboration among NGOs and other stakeholders. They spent their first experimentation cycle engaging other NGOs, and for the second

round have been focused on engaging youth in the design and raising funds for implementation. They submitted a proposal to a potential donor, created a logo (which can be seen to the left), developed a youth recruitment strategy, and are working on another concept note for donors. During their experimentation cycles, this group learned that there is an abundance of opportunities open to youth volunteers and competition between organizations and initiatives trying to attract them. Looking forward, the SYF team will be exploring partnerships with other youth networks in Cambodia, with the goal of holding the first youth festival in 2023. During the second round of experimentation, the Cambodia Resiliency Network (CRN) team focused their large, 15-member team on learning about the degree to which donors are open to joint funding models involving a cadre of NGOs working together. The team’s strategy had involved this kind of funding collaboration from the on-set of its work. To find out current practices they began reaching out to donors and INGOs to learn more about funding models. They connected with both the USAID Mission in Cambodia and INGO country offices, where team members learned the ins-and-outs of USAID contracting mechanisms, including the prime/sub model. Following these meetings, the CRN team continued to meet virtually using a Zoom account they purchased through the Social Lab. Discussions focused on establishing a common issue that their multi-sectoral organizations (health, education, agriculture, etc.) would be best positioned to tackle. The group decided on non-communicable diseases (NCDs) because of the intersection between health services to detect and treat NCDs, education about prevention and day-to-day management of NCDs, economic effects of NCDs on individual families, and Cambodian policies related to NCDs. They have created a powerful concept note on this topic, which they will use to continue talking with donors and INGOs. Each of the three teams have created lasting bonds among their own members and with the members of the other teams. We celebrated the teams’ accomplishments and the deep connections they have made at the final virtual reflection session hosted by Root Change and the three Cambodian coaches at the end of August.